Roger Melo, a doctoral student from Brazil, visited The Miller Mycology Lab for six months in 2013 and was recently interviewed for an article by Science Without Borders:  http://inct.florabrasil.net/csf-roger-melo/

Romina Maglia Sánchez’s visa was approved!  She will be visiting the Miller Mycology Lab from June–August 2014 and will be able to present her research at MSA.

Jason presented the results of his undergraduate research as a poster at the Undergraduate Research Symposium, April 13-18. 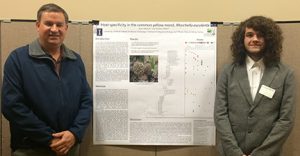 Dan’s research was the focus of Lindsey Marolt & Stephanie Walker’s project for The Cooperstown Graduate Program.  Check out their website here.

Dan’s research on Bat WNS was published in PLoS One with a news release that followed.

Roger Fagner Ribeiro Melo arrived in August and will spend the next 6 months working in the Miller Mycology Lab conducting his Brazilian Doctoral Sandwich funded through the Brazilian government (Cnpq).

Andy, Vince and Dan all gave presentations at the APS-MSA meeting in Austin, TX from August 10-14.

Davi Augusto Carneiro de Almeida arrived June 6 and will spend the next year working in the Miller Mycology Lab conducting his Brazilian Doctoral Sandwich funded through the Brazilian government (Cnpq).

Andy is in Brazil at the University of Feira de Santana funded through the Science without Borders Program through Cnpq and CAPES.  Andy and Huzefa Raja taught a Class on Ascomycota from May 13-15. 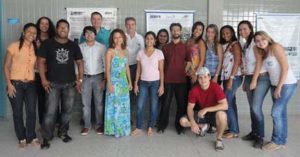 Andy attended the Panama-USA Dimensions of Biodiversity Workshop in Gamboa, Panama on April 9-10, 2013.

Steve Zelski received a short fellowship from the National Institute for Amazonian Research (INPA) in Manaus, Brazil where he spent two weeks at INPA training mycologists on how to collect freshwater ascomycetes in the Rio Negro, Rio Solimões, Rio Amazonas, as well as palm swamps and smaller tributaries in the region. In addition, Steve demonstrated procedures for species identification, isolation and pure culturing. While at INPA, Steve delivered a talk entitled “Tropical Freswater Ascomycetes” to the Mycology Department in the first week and to the Botany Department in the second week of his stay.

Andy presented a talk on “Mushroom of Illinois” at the annual meeting of the Sinnissippi Audubon Society in Rockford, IL on March 13, 2013.